Some of the NDE prayer-actions at Creech Air Force Base (in Clark County) and at the nuclear weapons site (in Nye County) lead to court cases. Some of the court cases lead to courtroom trials, which generally lead to convictions of faith-based peace and justice activists.

One of the defenses used in courts by NDE's prayer-activists is called the "necessity defense" in which the defendants attempt to prove to the court that it was necessary to break a small law in order to prevent a big law from being broken. Another defense used by activists charged with trespassing at the NNSS (nuclear weapons site) is the following of international law, including the supreme law of the land--upholding international treaties such as the Treaty of Ruby Valley. A third defense often used is the moral necessity or spiritual mandate, whereby defendants after a prayer-action show that their work for peace, justice, and love supersede any arguments about legality or lack thereof.

The second defense (regarding trespassing above) includes the reality of the Western Shoshone Nation’s jurisdiction over the territory where the NNSS is situated, therefore permission for non-Shoshones constitutes no trespassing (the NNSS is unlawfully operated on stolen Native Land.) The Nuclear Resister has more to say about this history.

In the case of Nevada Vs. Pegasus where the State of Nevada used NRS 207.200 (a misdemeanor trespassing idea) to prosecute the peace and justice activist, the court session lasted over an hour in Beatty, Nevada. Deputy DA Dworin argued the case in front of Justice of the Peace Gus Sullivan (son of Bill Sullivan who presided over hundreds of cases of peaceful demonstrators and nonviolent activists in the 1980s). Pegasus told Sullivan that the State utterly failed to provide any evidence of title to the land in question. Pegasus demonstrated (with the testimony of Shoshone Chief Johnnie Bobb) years of permission have been granted by the proper Shoshone authorities to non-Shoshones to be present for the sake of peace and justice at ”the Southern Zone of the Western Shoshone Nation” (a.k.a. the NNSS).

Despite failure to produce evidence of ownership to the land in dispute, Marcus Pegasus was found guilty and immediately sentenced to a $200 fine, payable within 30 calendar days, with a $105 mandatory court fee (even if the $200 is worked off via community service). Refusal to pay would allegedly lead to 25 days in jail, with further court fees still unavoidable, according to Sullivan when questioned by Pegasus.


In the cases of the Good Friday Eight (April 19th 2019) there's a weirder story. Read the below information if you are curious. Six of the defendants used only the Western Shoshone Permit (permission to be present at the perimeter of the nuclear test site where they were arrested) as ID for their warnings/citations. This could have reminded the illicit occupiers of the NNSS that Shoshones have the true legal authority here. But since the USA has got the nukes, Nye County Sheriff's Deputies claimed they needed "government-issued ID" and refused to accept the Western Shoshone Government's authority and identifying documents for activists. All 33 prayer-activists arrested on Good Friday could, theoretically, have been taken to jail, and given court dates. INSTEAD, under the discretion of the Sheriff (and their prior indication to NDE volunteers), 25 people were only given written warnings, because they showed non-Shoshone IDs after crossing the line, along with #ShoshonePermits. These 25 Warnings include the threat of real ticket/real court consequences if the activists ever come back to a supervised line-crossing ritual again here.

The Good Friday 8 are Tami Yaron, Robert Majors, John Amidon, Charlie Smith (first four released over the weekend) plus Mark Kelso, Brian Terrell, Jakob Whitson and Richard Bishop (second four held video conference with law-defying Justice Sullivan at 2:30pm Easter Monday). Currently all the court cases have been completely erased from the record and the bail was returned for four and the bail/bond returned for the other four.  See the latest news release.
Creech AFB arrests of Holy Week...
Brian, Brianna, Sady and George have their arraignments in Las Vegas on June 13th at 7:30am. 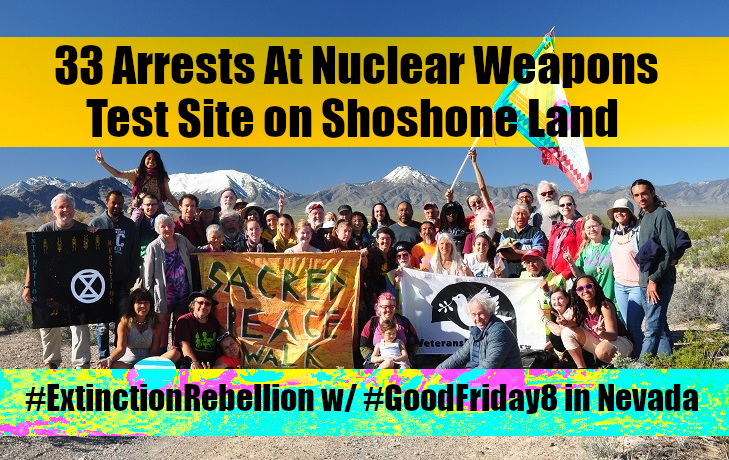 Be advised that this web page is often at least 24 hours behind the social media blitz. We are a nonprofit faith-based action group, on a shoestring budget, with an all-volunteer, part-time media department. 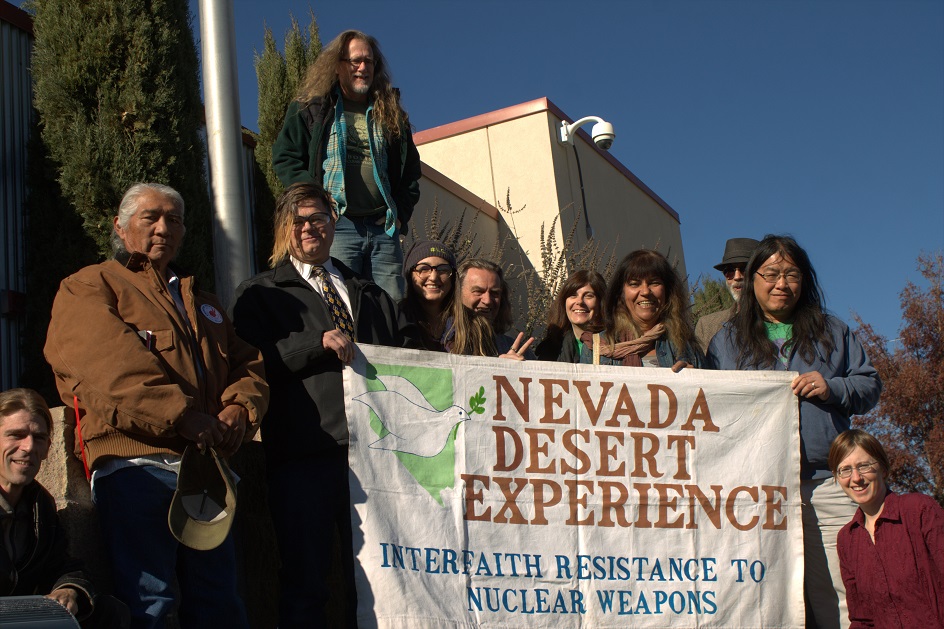 While waiting for courtroom clerical protocols to be complete, the NDE volunteers and Shoshone supporters had a minute to pose for publicity at Beatty, Nevada.

As former NDE-Staffer Sister Megan Rice said–none of us are free, even if we aren’t jailed anymore. 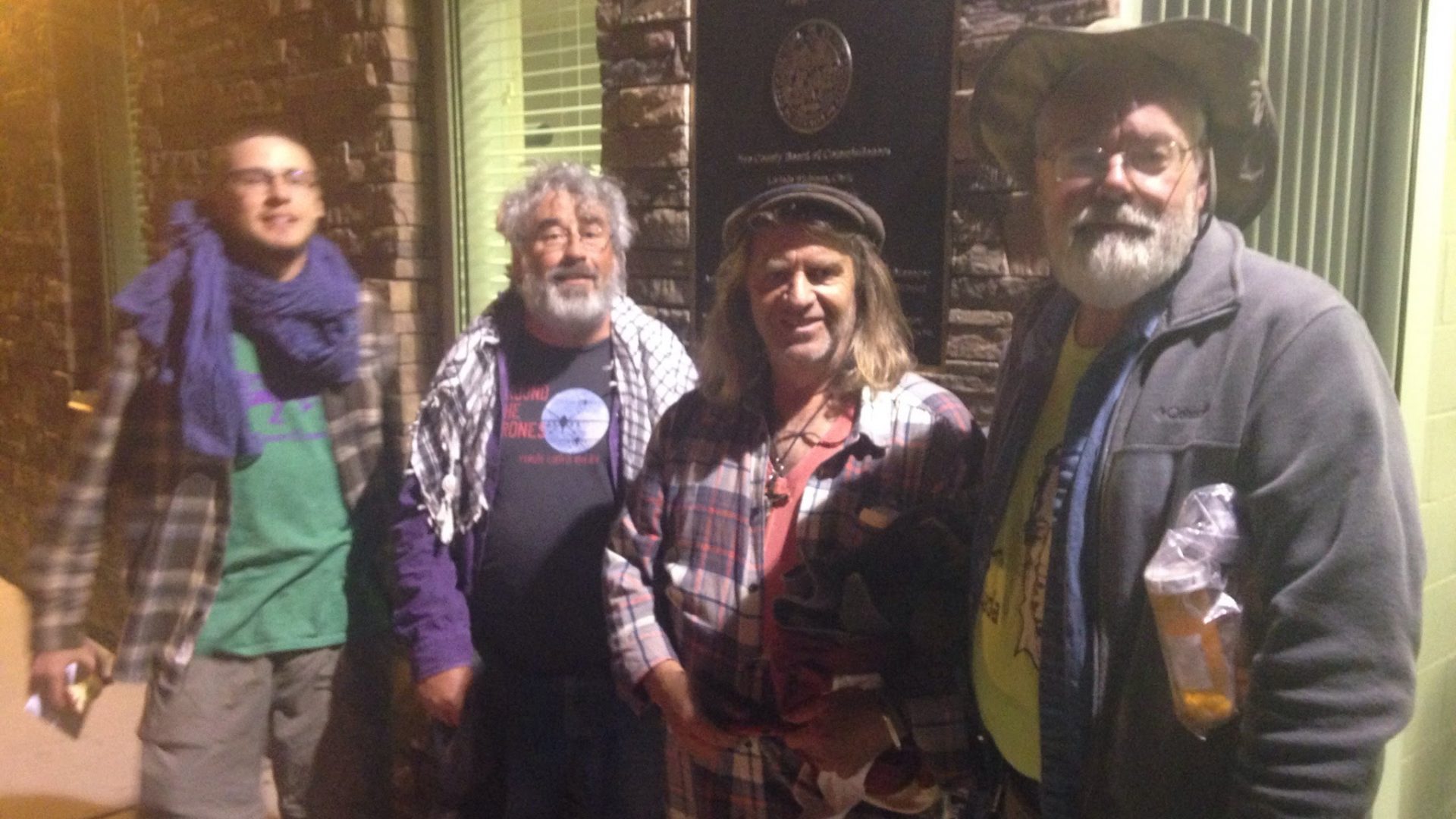 The final four of the #GoodFriday8 were bailed out on Monday the 22nd of April, prompting an arraignment date of June 10th. 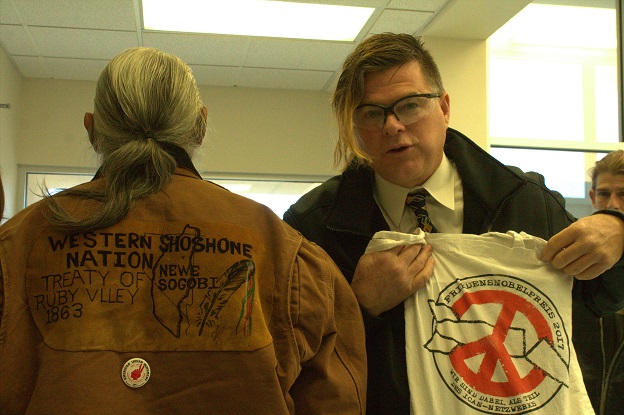