Augment your resistance to nuclearism with one of these letters.

The nuclear weapons abolition movement is alive and well.

One tactic useful for articulating our desire for a peaceful future is joining our voices together, and talking to folks with their fingers on the nuclear triggers.

In early 2018, Gensuikyo put out a letter to President Donald Trump of the Unites States of America. Here's a translation of the letter (to the notorious non-reader), and it's useful to quote in messaging to more influential characters in the US Government, and other folks who read and care about humanity.


February 6, 2018
Letter of Protest against the US Nuclear Posture Review

We, of the people of Japan, the A-bombed country, strongly protest against your nuclear policy formulated in the newly released "Nuclear Posture Review", which brings the US much closer to the actual use of nuclear weapons by modernizing your nuclear arsenals and developing new nuclear weapons.

Trying to justify that nuclear weapons are necessary for security, the NPR sets out sustaining and modernizing the nuclear triad (SSBNs, ICBMs and strategic nuclear bombers), as well as the development of low-yield nuclear warheads and sea-launched cruise missiles (SLCMs). Furthermore, it does not even exclude the first strike nuclear capacity.

As the devastation of Hiroshima and Nagasaki caused by the A-bombings from the USA showed, any use of nuclear weapons would have catastrophic humanitarian consequences. The world opinion determined to not allow this calamity to be ever repeated led to the adoption of the Treaty on the Prohibition of Nuclear Weapons (TPNW) in the United Nations last year. The policies laid down by the NPR run counter to this worldwide development in favor of a world without nuclear weapons.

We call on you and your Administration to cancel all nuclear build-up plans and nuclear strike policies formulated in the NPR. We urge you to sincerely endeavor to achieve a "world without nuclear weapons", which the United States once vowed to pursue, beginning with joining in the TPNW.

February 8, 2018
Letter of Protest against Your Support of the US Nuclear Posture Review

On February 3, you issued a statement welcoming the newly released Nuclear Posture Review of the Trump administration, which set out massive nuclear buildup plans and policies presupposing the actual use of nuclear weapons. We strongly protest against your position that actually affirms the use of nuclear weapons in spite the calamities of Hiroshima and Nagasaki experienced by our country.

Despite all this, you now support the policy of US "nuclear deterrence" which leads to the use of nuclear weapons and rely on it. This amounts to accepting the possibility of another inhumane tragedy like Hiroshima or Nagasaki to occur.

We demand that you, as the government of the only A-bombed nation, should oppose any use of nuclear weapons and break away from the US "nuclear umbrella". We further call on you to fulfill the duty of the A-bombed country to sign the Treaty on the Prohibition of Nuclear Weapons, have it ratified and take further actions to achieve a world without nuclear weapons.

Here's another Christian one, that is in a similar vein to NDE's perspective, is worth knowing about, and NDE does not endorse this particular piece, it might not be an example of successful diplomacy: 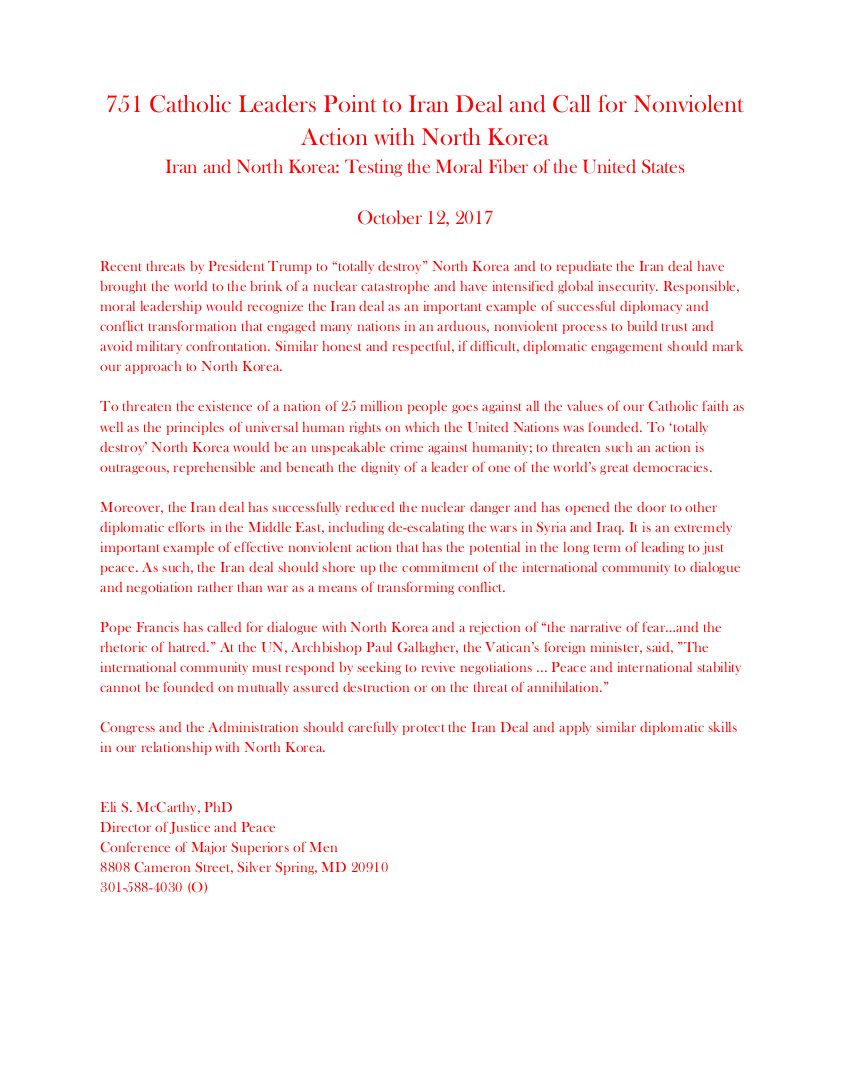 A more interfaith letter to prevent nuclear war with North Korea is being formulated.